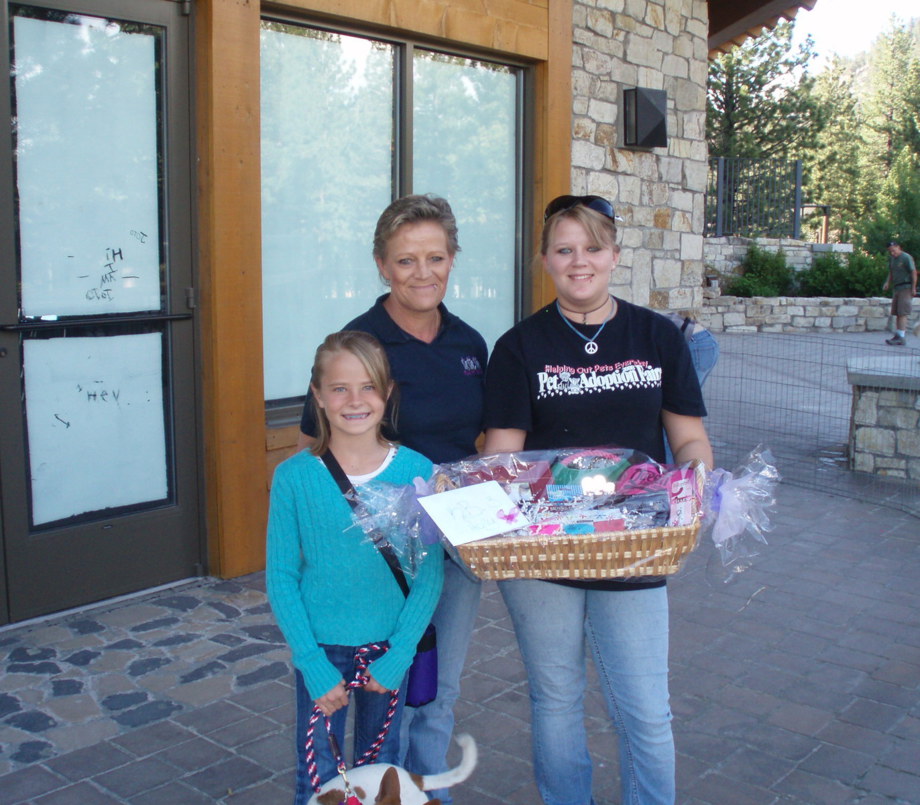 Annie is a 12 year old Rat Terrier that was born in one of the many puppy mills that operate in Oklahoma. In August 1999 at six weeks of age she was sold and shipped to California where she would spend the next eight years as the constant companion to an 89 year old gentleman who was confined to a wheel chair. Because of her owner’s physical restrictions Annie’s puppyhood was basically nonexistent. She never learned how to play with toys, or fetch a stick, nor had another dog she could play “Doggie Games” with. She wasn’t socialized properly and riding in the car was limited to the annual trip to her vet. The environment Annie lived in wasn’t one of physical cruelty or neglect, but instead one that in her small world she believed there was her, her owner, his care giver, and the “strangers” that came to visit her owner on rare occasions. During these eight years she was devoted to her owner, spending the hours of her day either lying on the bed at his side or curled up on his lap as he sat quietly in his wheel chair.

Annie’s owner passed away in the fall of 2007. Before his death he didn’t make arrangements for Annie in case of his death. After his death none of the family showed interest in giving Annie a new home where she would be loved and cared for. Instead she went to live with his daughter where she was unwanted and often was referred to as “being a burden”, and it was often heard that “she didn’t have time to take care of a dog”.

Shortly after the first of the year 2007, I was contacted by a woman, who was a friend of Annie’s new owner, and she began telling me about Annie. The story she told me was one I think we as dog lovers have all heard before. The story of how an older dog that wasn’t raised around children had bitten a very young child and the owner was going to have the dog killed. The woman asked if I would save Annie’s life by accepting her into my rescue program.

I arranged to meet Annie and after hearing the story and seeing how uncomfortable Annie was in her current surroundings, she entered my program and left with me after that first meeting. It was obvious to me that Annie had no idea how big the world really is. She was terrified of EVERYTHING. As I drove away she sat in a carrier trembling in fear. When I introduced her to the other dogs at my house, which included Border Collies, a GSD/Rottie mix and several Jack Russell Terriers, it was clear that she had some dog to dog aggression issues that needed to be addressed. I spent the next year bringing Annie out of her shell, socializing Annie, helping her overcome her fear of riding in a car, and modifying her aggression issues. Shortly after that first year she blossomed into an nine year old Terrier who was young hearted, and a vibrant dog that enjoys car rides, thrives on interaction with dogs of all sizes, and she had gained the confidence and training to compete in Flyball tournaments. Not to mention she had stolen my heart! I made the decision that rather than place Annie up for adoption, she would be welcomed as a valued member of my family.

In July 2012, I noticed that Annie looked “A little off” in one hind leg. Not all the time and I wasn’t able to find any common contributors for it to occur. I took Annie to visit my vet and unfortunately Annie didn’t show that occasional “hitch” while we were there. My vet examined her and didn’t really see any red flags for a dog her age and past history. She put her on Previcox, which should help with pain, but seeing that she is an older dog at age twelve and given her genetic makeup (probably inbred coming from a puppy mill) advised me to be prepared. Annie seemed to be improving for about ten days after her last vet visit. She would begin walking in a straight line, go about three feet, wobble for a stride or two and then continue going straight. I called my vet and took the first appointment she had available, which was two days later. By this time Annie’s back remained in an arched position and to me it looks like her brain no longer had the ability to control and or direct her hind end. I know she no longer has feeling in the bottom of her legs because she often stands with her toes knuckled under rather than bringing her foot forward and resting her foot on the pads of her feet. Other than this lack of being able to control her hind end she appears fine. Her eyes are bright and clear, her attitude is still great, she is still doing the little naughty things that Terriers find joy in doing. And she was still choosing to go potty outside.

At her next appointment with my vet, after examining Annie she explained that she could run a few tests, and schedule an MRI for her. She said it could be a slipped disc in her back, or with her genetic makeup it could been something a lot worse. Based on conversations and some advice from my veterinarian I was not comfortable with putting her under anesthesia which is required to perform the MRI. In the next few days Annie went downhill fast. She could no longer use her hind end. I had to put her hind end in a sling just so that she could go potty. I got a wheelchair for Annie and she adapted quite well and quickly.

What I did next, on the suggestion of past adopter, Anna DeVera and her husband Darrell, that have become close and trusted friends of mine, I took Annie to Anna’s vet who is also an Acupuncturist. Annie was examined and x rays were taken. The diagnosis was that the fluid contained between the vertebrae had burst causing three of her vertebrae to fuse together. After Annie’s first treatment the improvement I saw was indescribable, although she continued to need her wheelchair. After several treatments Annie had improved enough to where she was able to get around in a rather unorthodox fashion but unassisted nonetheless. Now a year later Annie’s back remains in an arched position but she is able to walk, run and even jump onto my bed. Annie still enjoys the interaction between us that she gets during training sessions, so I have started training Annie on the Agility obstacles.

After the isolated and lonely life Annie endured with her first owner, and because of the energetic, playful dog she blossomed into after being in my rescue program, I feel Annie has more than earned and certainly deserves to be given a second chance.